The Lymstone Lofts building on the Williamsville-Amherst border is set to open to its residential tenants next week, with a spa and Lloyd Taco Factory coming after that.

Bevilacqua Development is developer and general contractor on the three-story building at 5933 Main St., across from Williamsville South High School. The 56,000-square-foot building has retail on the first floor and 20 upscale apartments on the upper floors.

Bevilacqua has leased nine of the apartments and the first tenants are set to move in as soon as next week, pending final inspections, said CEO Jonathan Bevilacqua.

The apartments feature 10-foot ceilings, balconies on every unit and quartz countertops. Monthly rent starts at $2,000 for the 14 two-bedroom and six one-bedroom apartments.

The company plans to finish construction on the retail space for Woodhouse Spa, a franchise full-day spa, by mid-August, Bevilacqua said. The spa should open soon after. Construction on the Lloyd Taco Factory restaurant should finish by the end of August, said Bevilacqua, who didn’t have a firm date for the restaurant’s opening.

Bevilacqua still is working to lease out the other two retail spaces on the first floor.

Bevilacqua took over from the project’s original developer, Dr. Lawrence N. Teruel of Arizona, in 2015. Teruel’s father had long owned the site, where a one-story commercial structure had sat vacant for many years.

Bevilacqua estimated spending $8 million to $10 million on the project and received $930,000 in tax breaks from the Amherst Industrial Development Agency. The project was eligible for tax breaks because the site was a brownfield. The tax breaks do not apply to the retail portion of the development. 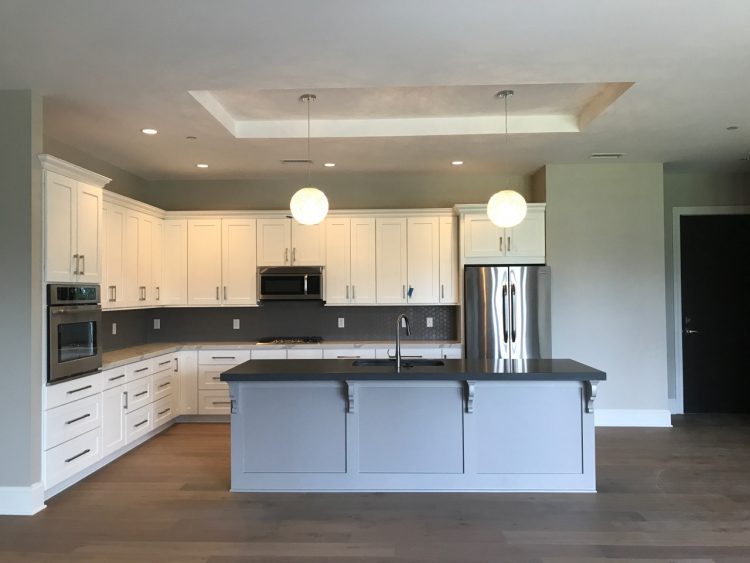 A view inside an apartment in the Lymstone Lofts. (Photo courtesy Bevilacqua Development)